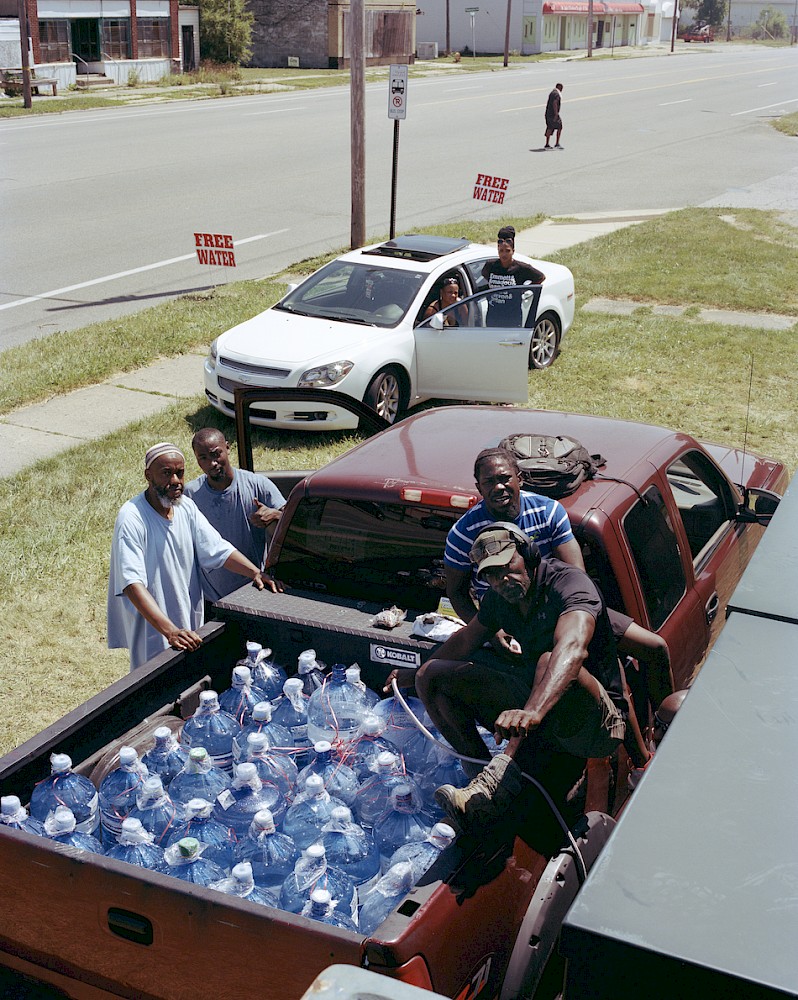 The Kunstverein in Hamburg presents Flint Is Family, Act III by LaToya Ruby Frazier (b. 1982), the final part in a series of photographs documenting the water crisis in Flint, Michigan, which started in 2014 and continues today. Through capturing the stories of Flint residents, Frazier shows how industrial and governmental neglect toward the sanctity of the city’s water supply had an immediate impact on the lives of community members. In this final act, Frazier shows how Shea Cobb, Amber Hasan, and herself—three African American women from working-class backgrounds—were at the helm of bringing resources and care to a community under attack.

Flint Is Family began when Frazier traveled to Flint, in 2016, commissioned by Elle magazine to document the water crisis that resulted from lead contamination from the city’s infrastructure and its effects on the community. While in Flint, she met with poet, activist, and mother Shea Cobb, who would collaborate with her for five years, documenting the stories of Flint residents while working on initiating tangible solutions to provide clean and safe drinking water. What resulted is a series of photographs organized in three acts that follow Cobb in her fight for her family and community’s health and wellbeing, imaging her family’s personal negotiation with their environment, and documenting the personal costs of corporate and governmental irresponsibility.

In Act I, Frazier introduces Shea Cobb, her family and her collective of artists, The Sister Tour. While on assignment the artist accompanied Shea Cobb and documented her daily life.  Motivated by her desire to protect her daughter’s health, Cobb decided to move her family to Mississippi. With Act II, Frazier shows the reverse migration of Cobb and her daughter to her father’s land, which they will one day inherit. However, due to the segregation and discrimination in the local county school system they soon decided to return to Flint.

Act III documents the arrival of an 11,793 kilogram atmospheric water generator to Flint in 2019 that Frazier, Cobb, and her best friend Amber Hasan managed to set up and operate on the north side of the city. This third act records people’s reactions to the introduction of the generator, which, for many of the city’s younger residents at least, was the first time potable water had been readily available in living memory. Through photographs and text, Frazier provides testimonials from residents, telling of their struggle to attain clean drinking water, the health problems caused as a result, and the further impact of this public health crisis on the social fabric of the community. Throughout this presentation, Frazier shows how the impact of industrial and governmental mismanagement on the environment has direct social effects on the communities living there.

Expanding on the legacy of the work of Gordon Parks and Ralph Ellison, who photographed 1940s Harlem, Frazier approaches injustices of today as a continuation of this social documentary photography that is as formally astute as it is politically forceful. Frazier’s work, which focuses on actively addressing issues of social injustice, labor rights, racism, and environmental pollution in cities plunged into decline by deindustrialization, veritably corresponds with the theme of the 8th Triennial of Photography Hamburg: currency.

Stay up to date with the latest news from 8th Triennial of Photography Hamburg and our program over 2021–22.

These include essential cookies that are necessary for the operation of the site, as well as others that are used only for comfort settings or to display external content. You can decide for yourself which categories you want to allow. Please note that based on your settings, not all functions of the website may be available.

These include essential cookies that are necessary for the operation of the site, as well as others that are used only for comfort settings or to display external content. You can decide for yourself which categories you want to allow. Please note that based on your settings, not all functions of the website may be available.

To load this element, it is required to consent to the following cookie category: {category}.